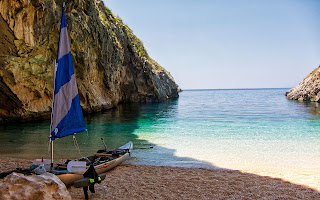 On a beach in the Karaburun. The only way to get there is by a boat.
View at Picasa
Click here to see all pictures 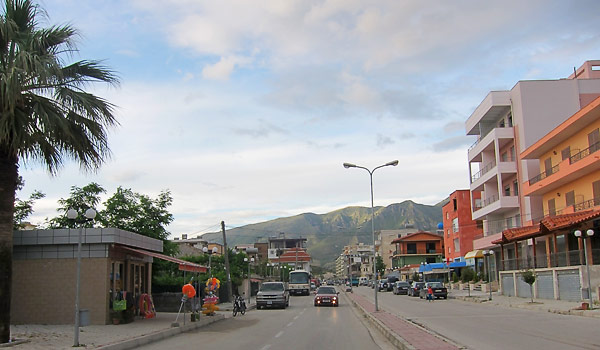 Orikum – a little town with atmosphere and history

After just a few days of my first stay in Orikum, which is a small town situated at the end of the pretty shore of Vlore Bay, I felt quite like at home. I would be unable to find this familiar sense of closeness neither in the Spanish seaside towns nor in quiet Italian villages, let alone in the Canary Islands? resorts  where I more or less felt like a tourist.

But here – in Orikum, whose long beach with very fine pebbles is so popular at the weekend with Vlorans, I have found this long sought-after feeling of belonging. And although there are several restaurants, hotels and shops open late at night, the town has retained its original nature and the atmosphere of an unspoiled place where life goes on without any excessive exaltation so common to all those commercialized tourist oriented places.

Orikum in a nutshell

In Orikum, you can start your day listening to birds singing while enjoying your  breakfast, and local vegetables and fruits with no pesticides! I had almost forgotten the smell of a carrot or a tomato ? yummy! A paradise for people with food allergy problems, and all these treats in such charming surroundings of mountain ranges and the sparkling Adriatic sea.

Fancy a swim? Take a 10 mins walk from the city centre and take ?.the plunge into the emerald waters of the Adriatic.

Or perhaps you feel like climbing the Karaburun mountains? Great fun guaranteed, but better to plan it rather than wing it, as there are no dedicated tracks for tourists, so you have to rely on your trekking experience and …Google Maps. 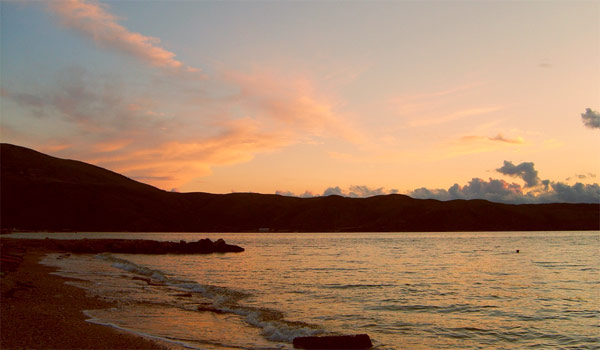 According to Pseudo-Scymnus, an anonymous Greek author and geographer, the city of Orikum was settled by the lost Euboeans, who were blown off course by strong winds on their return voyage from the battle of Troy, in the 12th -14th centuries B.C. The excavation works led by Swiss-Albanian team have so far revealed a layer of ruins of a city which dates from 6th or 7th century BC. Presently, the ruins are preserved in a national park. The ancient Greek city sits on a favorable geographical position where the Adriatic and Ionian Seas meet. As well as its proximity to Italy and Greece, this made Orikum an important harbor on the Adriatic coast. Orikum was later occupied by the Romans as a defensive base in their wars against the Illyrians and the Macedonians in the 3rd century B.C.

The Park which lies at the southern end of Vlora bay shows archaeological evidence that Orikum was a developed urban center, with an amphitheater that could hold around 400 spectators. Submerged under the Orikum lagoon, the city?s elaborate network of roads can be still seen today. Cost of admission ranges from 200 lek for Albanian visitors to 700 lek for foreign visitors.

From modern Orikum, looking west in the distance across the Bay along the Karaburun Peninsula, visitors can view the Pashaliman Army Base, which was a strategically important military installation for the Warsaw pact in Albania.

Pashaliman port is thought to be the oldest Albanian port which is still in use today and it dates back to the Roman Empire. The military base which is presently still operating there don’t allow any visitors to the area and there are NATO guards controlling the access to it. All those interested in the history of the port can read the book ?The Long Winter of Loneliness?, written by Albania?s famous poet and author, Ismail Kadare.

Another example of Orikum’s rich history is the picturesque Byzantine Church of Marmiroi which, based on the topology of the churches of that time, is believed to be built before 8th century AD . The church still contains interesting frescoes and wall paintings on the wall. Traces of the church?s narthex are also still intact. The church has  three  entrances  and  is  renowned  for  its  complex construction and architectural values. The Marmiroi Church represents  one  of  the  rare  examples  of  cross-shaped churches with a dome poised over a high cylindrical roof.

The church is located 2km west of Orikum at the foot of Karaburun mountains and next to the south west part of  the lagoon. To access it you need to cross a small stream. See below details on how to get there from centre of Orikum. 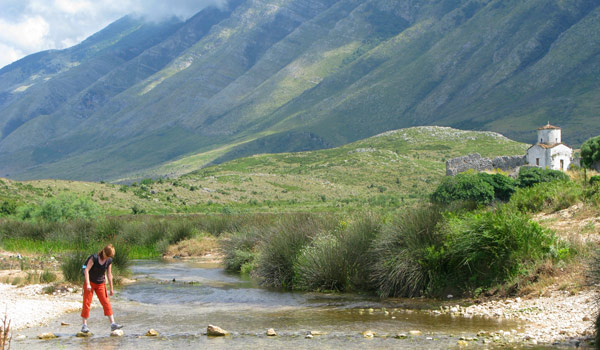 Picturesque and well worth the visit the Church of Marmiroi at the foot of Karaburun mountains.

And if you are more of those social-party creatures – not particularly cut out for an idyllic peaceful village life of Orikum, then in 20 mins you could be in Vlore – the biggest city in Albanian Riviera, so vibrant with touristic life – you?ll be spoiled for choice: discos, pubs, clubs?

This is a scenic 8km circular walk from Soleal Apartments to Marmiroi Church and the Lagoon and back via the beach. Credit goes to Derek Smith for writing excellent instructions for the walk and drawing beautiful maps.

For details about similar walks (most of them start in Orikum), please visit these posts:

Time required: 2,5-3,5hrs – depending how long you want to visit the church for.

Difficulty: easy, check the Disclaimer. Recommended for all type of turists, it should be ok to take older children.

The walk starts just minutes away from the Soleal block on the access road in front of the block behind the Town Hall.

Find the path to the left of the Hasan Pulo School (the modern white single story building). The path runs between the allotments and smallholdings on the right and a dirty canal on the left. The path has been improved and opens out after 1KM to a wider one for vehicles. 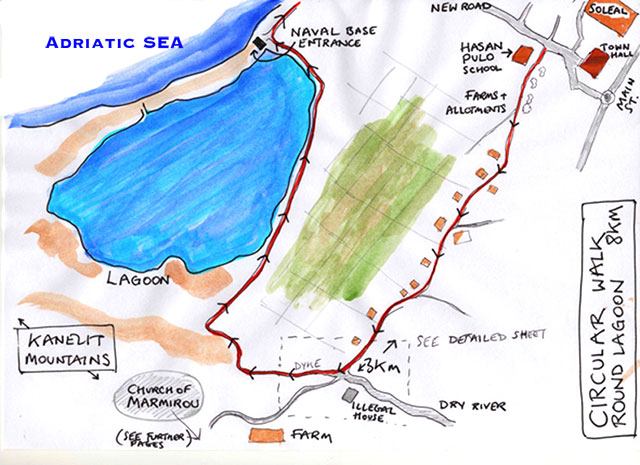 Follow the path directly towards the mountains . You will pass about 8 small farm houses mainly on the right, for about 3Km. At the end you will see an illegally built structure on a hill ahead to the left. The shaley path and a dyke to the right leads to the Lagoon. There is a stream in front and dried up river but do not cross if you only want to do the lagoon walk.

For the Marmiroi section carry straight on across the stream (stones to the right) or the low concrete slab across to the opposite flat bank.

The view of the church is obscured by the illegal yellow farmhouse on the left of the path which is private even though illegal, so you won?t see Marmiroi until you get round the bend a bit . Going to the left once across the stream and river bed may be difficult because the farmer discourages it, so the right route may be preferable but involves the base of the difficult curved stony hill opposite.

This effort reveals a gentler path beyond. There is no easy access point to the church itself because of the undergrowth. However if reach the back of the site and face the front door of the church (follow directions on map)  at 45-50 degrees to your right you should find a vague path through the long grass. DO  TAKE EXTREME CARE .

The church may not  be open but the views against the mountains are spectacular and well worth the effort. If you gain access to the interior, please drop 200 Leks or more in to the box ? the volunteers who run this appear to have no funds to keep it in order.

Once back across the stream, simply carry on along the dyke which curves to the left (east) towards Pashaliman. Watch out for the hundreds of frogs and tortoises along the stream edges. The 3Km path is fairly well defined and the path turns sharp right to the South along the lagoon itself and then turns towards the beach.

It comes out from the reeds to the entrance to Pashaliman Naval Base on the left. The Orikum excavations behind the gates are world class but inside the site so out of bounds. If there are a few of you ask at the gate. The armed guards are quite friendly and they may be able to find someone to take you in to see the site for a half an hour. I recall we paid 300-400 Leks each and worth every one.

There are some new Swiss funded excavations in 2010 after exciting new discoveries.

Once on the main beach road there is a café restaurant right opposite the gates and more further on as you head back along the beach road and public beach to the junction with the new road at the Edir Bar which returns you to Orikum Centre and Soleal.